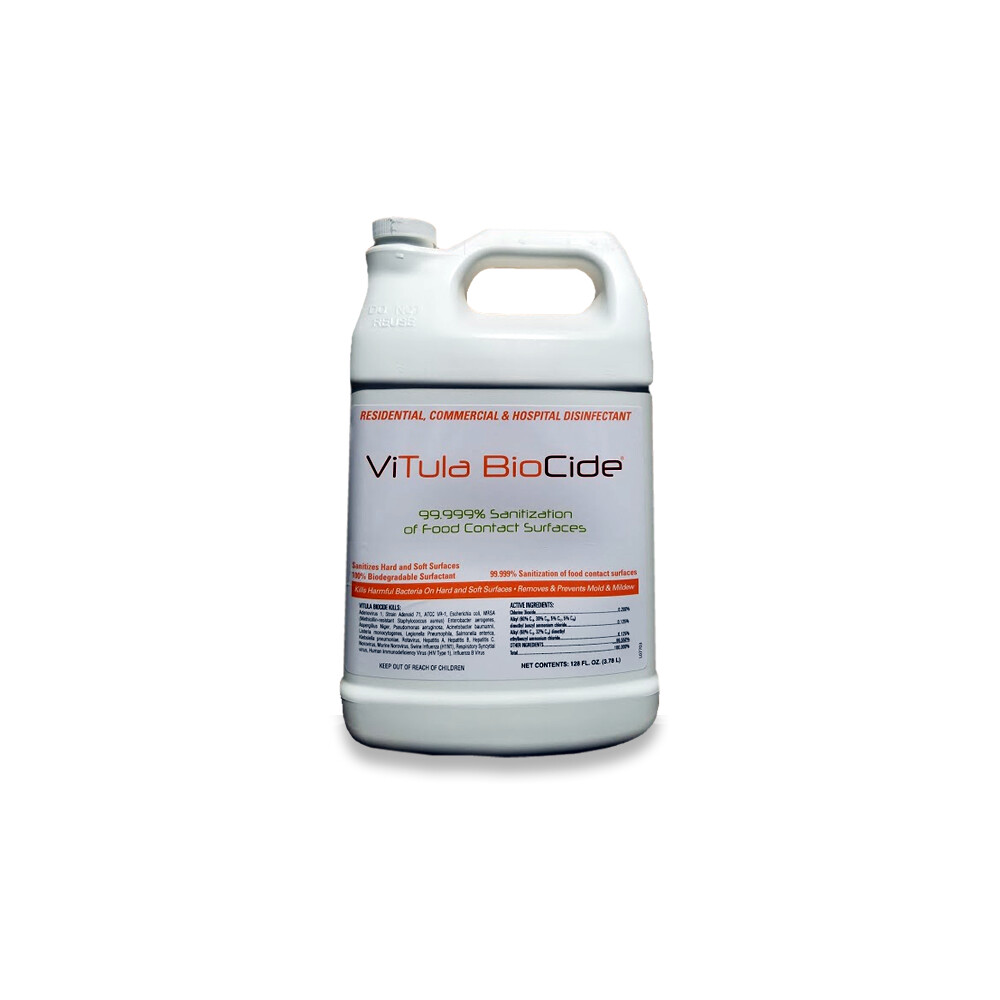 Vitula Biocide is EPA registered hospital disinfectant cleaner, mold killer, and odor eliminator. Vitula Biocide’s formula is non-irritating to the skin. Non-corrosive to most treated articles and NSF certified (No rinse required) for food contact surfaces. Made ready to use, Vitula Biocide kills 99.999% of bacteria, including E.coli, Salmonella in less than 60 sec.

Removing mold and bacteria can involve strong chemicals that may trigger health problems, like chlorine bleach products that produce trihalomethanes (THM) and haloacetic acids (HAAS) which are linked to cancer. Now there’s an ecologically sound alternative. Vitula Biocide is used against the Ebola virus according to recent Center of Disease Control and Prevention guidelines. Vitula Biocide is colorless, odorless – so mild and you can wash your hands in it, will not harm hard or soft surfaces, or colorfast fabrics. Use it on shower curtains, under sinks, in basements and crawl spaces – anywhere mold and bacteria are found.

Vitula Biocide’s formula is ready to use and shelf stable. No mixing required, spray, wipe, or fog right from the bottle for hospital grade disinfection.

Vitula Biocide is stabilized to retain over 98% of its strength for over one year under normal storage conditions. At the same time the stabilization is controlled to allow a rapid equilibrium between the “stabilized” and “free” chlorine dioxide. This means that the Vitula Biocide total 2,000-ppm Chlorine Dioxide is available almost instantly as needed to destroy harmful microbial substances, and whatever is not used will be available in reserve for long-term residual activity.

Vitula Biocide can be diluted for carpet treatments and to use it as a daily sanitizer.

Vitula Biocide includes components that dramatically decrease the size of it’s particles. This increases the ability of the active solution to spread on and to penetrate both hard and porous surfaces. This also makes it effective against airborne pathogens by reducing droplet size from sprayers.

We can clean for appearances and we can clean for health. Cleaning for health is the act of cleaning without the dangerous impact of harsh chemicals. Healthy cleaning is as practical to our life style as eating correctly, getting enough sleep, and exercising. Healthy cleaning doesn’t only apply to our homes, but to all places we go. From home to our work place, schools, restaurants, childcare centers, and health care facilities, to name a few. We all want to live in a healthy environment, yet many of the common cleaning and disinfecting products sold today under the guise of creating a healthy environment, contain harmful chemicals strong enough to cause eye, nose, and lung irritation, as well as rashes, headaches, nausea, and asthma.

The USEPA estimates that cleaning products alone contribute approximately 8 percent of total non-vehicular emissions of volatile organic compounds (VOCs). VOCs are emitted by a wide array of products numbering in the thousands. Examples include: paints and lacquers, paint strippers, cleaning supplies, pesticides, building materials and furnishings, office equipment such as copiers and printers, correction fluids and carbonless copy paper, graphics and craft materials including glues and adhesives, permanent markers, and photographic solutions. Look under your kitchen sink, have you brought toxins into your home, all in the name of healthy cleaning?

Healthcare associated infections (HAIs) are the number four cause of death in the United States, exceeding the combined mortality of breast cancer, AIDS and traffic accidents. In a 2008 article, the editor of the New England Journal of Medicine, estimated that hospital acquired infections add an average of $15,000 to the cost of care which puts a total cost of infections in the U.S. around $40 billion a year.This cost is in addition to the suffering caused with more than 2 million infections a year, over 150,000 deaths and millions of extra days spent in the hospital.

Of equal concern are the evolving antibiotic resistant strains of microorganisms such as Methicillin-resistant Staphhylococcus aureas (MRSA) and Acinetobacter spp, which are making the resulting mortality of a healthcare associated infection greater than ever.

The result has been increased public pressure, and legislative initiatives, holding hospitals accountable for these increased costs. In October of 2008, Medicaid approved a policy to no longer reimburse hospitals for certain preventable errors (including some types of infections) and Medicare is reserving the right to further expand the list. Private insurers are following this lead.

One recent study found that 59% of environmental surfaces were contaminated with MRSA in affected patients’ rooms. Yet a rigorous environmental cleaning intervention can reduce the transmission of MRSA and other multidrug-resistant organisms in hospital intensive care units.

Vitula Biocide is a Fast and Effective Way to Kill Virus, Bacteria, and Mold That Cause Healthcare Associated Infections.

Mold and Mildew can be found almost anywhere as it can grow on virtually any substance when moisture is present, and can be a risk to our health and wellbeing, triggering asthma attacks and other allergic reactions as well as off gassing harmful VOC’s into our environment.

Used and recommended by mold remediation professionals, Vitula Biocide can be used in all areas of the home, from bedroom and bathroom to concrete walkways and crawl spaces, and yet is gentle enough to be used on fabrics like clothing and upholstery.

Vitula Biocide has shown long-term effectiveness against mold and mildew regrowth for up to 7 months with one treatment.

Save this product for later
Display prices in: USD

Please allow up to 7 days for shipping, however, most orders from the previous day are processed daily by 12PM the next day.
Product note: Depending on the state in which you live, product may be labeled “Vitula Biocide” or  “Vital Oxide”.
Have a different question? Please see our FAQs.